That O2 advert with the cat channeling his inner dog (as if!)...when he's in the car at the end, he really does look like Crack
Fox! 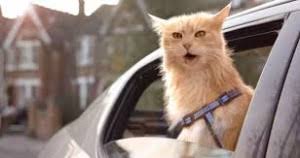 R Next Door was really getting on my tits with her insane pronouncements about 'self-inflicted' ailments, and how people like me have bankrupted the NHS. She's totally entitled to her weird beliefs, of course, but what really makes me twist and shout is her  refusal to acknowledge that any other opinion might have some sort of validity.
I went to the South Bank to chill, after the park, and it was lovely; nice and breezy, On the way back, though, had to wait 20 minutes for a 77, with a woman and her several untrained brats (Another on the way-) The shrieking homunculus of a toddler kept emitting the most uncannily inhuman cries, like the Keres in Birtwhistle's MINOTAUR, to Mum's fond amusement. They got on my bus, of course, and proceeded to open a megapack of cheesy balls... I admit it, I sometimes eat these in the privacy of my own hovel, but I do not hold with stinking out already airless public transport with them. The child's screeching was unimpaired, just enhanced by crumbs and drool. I kept thinking things like 'It should be KILLED!' Yes, I am indeed a Bad Person.
THE RETURNED did, of course, end leaving zillions of questions infuriatingly unanswered. Tune in for Series 2 next year. French bastards!
Collapse